A big thank you to everyone who has supported our efforts to raise monies for the two main charities involved in this endeavour. Namely Our Lady’s Children’s Hospital Crumlin and Chernobyl Children International. We have been truly amazed by every ones response when asked for support whether when David knocked on your doors, the bag pack in Dunnes Stores Shannon and especially from the school community for their fantastic efforts in their Summer Fair which far exceeded our wildest hopes. The students, teachers and parents all worked extremely hard to make a memorable day for all involved and thank you all very much.

Since the summer started (I use the term loosely!) Both David and Miriam have been climbing in Dingle. Mount Brandon (second highest mountain in Ireland), Mount Eagle (twice, first time couldn’t see more than a few meters!) and a very wet climb from Brandon Bay over the hills to Anascual to visit Tom Creans birth place for inspiration! The little ford on the climb turned out to be a major waterfall and required a detour of a further three miles retracing their steps to find a fording point that wouldn’t be dangerous!

They have survived many more other local climbs and high altitude training in Limerick. There is a Low oxygen gym in the Delta Retail park where they did circuits and spinning to prepare themselves for the environment they will be going to. Hard work but very worthwhile to experience what high altitude will be like. Although they were only taken to 4000m whereas on Kilimanjaro they will be going to 6000m! 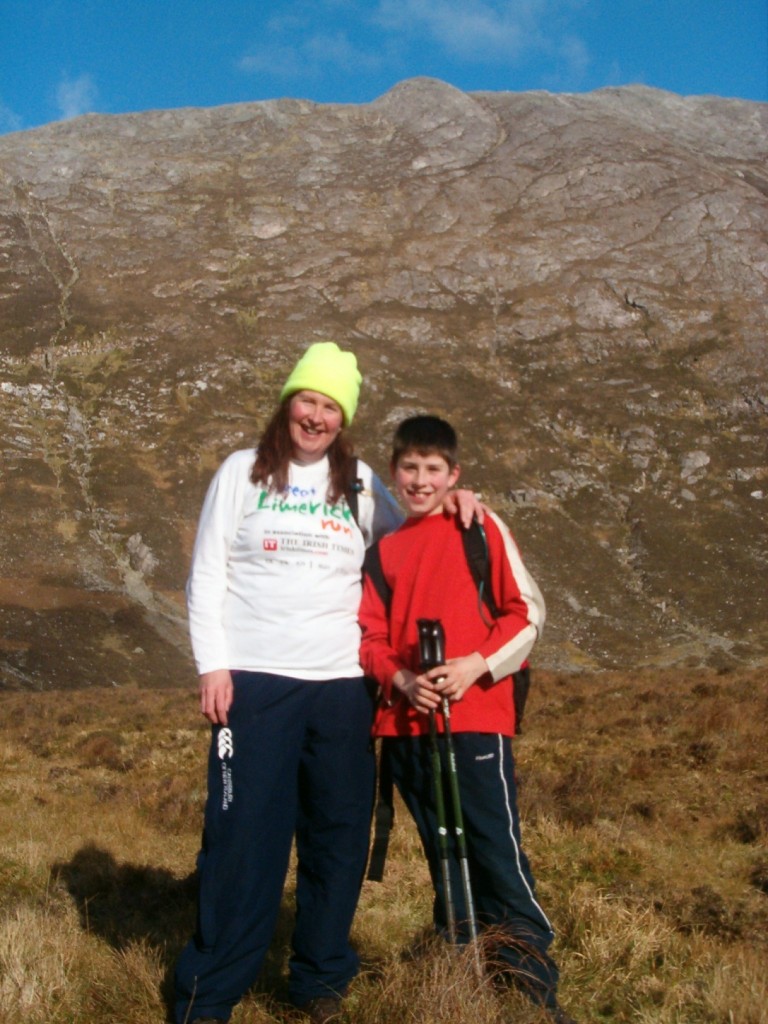 Well the time has finally arrived and they have squashed all their gear into their kit bags and left these shores (and hills). On the 15th they took off from Dublin at 6am for Amsterdam and then onto Kilimanjaro arriving at around 9pm at their base hotel ready to set off early on the 16th on the first day to the top! You are all welcome to follow them on Ian McKeevers Kilimanjaro Achievers web page on their Facebook link which will be updated as they go along. Although there is poor reception and signal in the early stage.

Their Route to the Top  The Lemosho Route

1. Day 1 We Drive to Londorossi Park Gate then on to the Lemosho Glades (2100m, 3h.). We walk along forest trails to Mti Mkubwa (big tree) campsite, (2750m, and 3h.). We leave lunchtime arriving just before darkness after 4pm.

2. Day 2 The trail steepens and crosses several streams in the giant heather zone. The Shira Ridge is crossed (3600m) to the Shira Plateau, camp by stream. (3500m, 5 h.). NB can be very cold at night in exposed plains and the silk liner is so important here in the sleeping bag.

3. Day 3 A gentle walk across the plateau leads to Shira Hut camp on moorland meadows by a stream (3840m, 1h30min.). A variety of walks are available on the Plateau making this an excellent acclimatisation day.

4. Day 4 A rocky path leads east up towards the Lava Tower. Shortly beyond this, you descend to Barranco campsite (3950m, 4-5h.). NB this is the key day in the mind of the OR. It’s this day that symptoms most likely will present. But this day is so important for 2 reasons. A it represents the 1st trip above 4,000 metres but we climb high and sleep low so the groggy feeling dissipates largely by the next morning as the kidneys work harder to produce more red blood cells (see appendix on nutrition) B the body’ physiology doesn’t actually change again until 6,500 Metres approx so in other words once you come through this test then you can rest assured in the knowledge that you have every chance of summiting at 5,900 metres. It becomes a mental test thereafter but the team leaders need to show positive encouragement for this point on and focus n the glass half full for the possibilities that lie ahead.

5. Day 5 Scramble easily to the top of the Great Barranco and then a traverse over screes and ridges to the Karanga Valley campsite (4.5-5h, 4000m.), beneath the icefalls of the Southern Glaciers…. The scramble is 30-40% easier than the one they will have done prior on the likes of the Devils Ladder on Carrountohill for example and the views are truly spectacular. On this route there will be traffic form other rout parties and all groups must take their time as the scramble begins. A really great day for filming…

6. Day 6 The trail ascends a ridge to a campsite by the Barafu Hut, an airy location with little vegetation very rocky and under the sun’s influence (3.5h, 4600m.); this is the pre summit camp. It will be warm and the sun will be out all afternoon. After we eat lunch the team will sleep for approximately 6-7 hours and reawaken at 11pm for their pre summit supper (see appendix on food).

7. Day 7 Start just after midnight for the ascent of the screes leading to Stella Point (7.5 -8h, 5725m.). From here a further 40mins Lead’s the 2 groups to Uhuru Peak. We will have 2 ascending groups those that are gong more slowly will set off at 11.45pm and those that are traveling more quickly will leave 30 minutes later. The 2 groups then descend to the Barafu Hut spending no more than 10 minutes on the actual summit for a rest and brunch before continuing down to camp at Mweka Hut at 3100m, (11-14h total walking time).

8. Day 8 A 3-4 hour descent through beautiful forest brings us to the Park Gate and by lunchtime the feel of a cool clean shower and the inviting sun loungers back at the lodge!!.